Tapping out from Conor McGregor: How this fan stopped trying to excuse the inexcusable

Glory days (they’ll pass you by):

For a generation of Irish people, myself included, mixed martial artist Conor McGregor’s relentless run through the UFC’s featherweight division, culminating in his now legendary 13-second knockout of bitter rival José Aldo in 2015, was our Italia ’90.

A seemingly crazy comparison to make but that was how it felt, for many of us anyway.

He was a force of nature that seemingly came from nowhere. How proud I was to see him put a stamp on the international stage of a sport once assumed by many to be beyond the abilities of the Irish. I looked on in delight as he proved the naysayers wrong time and time again. How wrong they all were.

His bully attitude and insults were excused away as just part of the business. He was getting eyes on himself and the sport and if people couldn’t understand that, they were just “haters.”

It got my back up when I heard people talk badly about him. Insults that, to my mind, often bore the weary mark of classism and begrudgery.

As my friends drifted one by one from the cult of McGregor, I held fast.

I managed to find some sort of excuse for one disgraceful antic after another, if even to myself.

When he jumped over the cage at a Dublin MMA event that he was not involved in and assaulted a referee, “It’s just showbiz, baby.”

When he flew from Dublin to New York with a gang of thugs and stormed a UFC event, throwing a hand-truck through a bus window, injuring several fighters? “Well, Khabib Nurmagomedov, his intended target, did slap Conor’s teammate hours prior. Sure, it got out of hand, but maybe if I had access to a private jet and my friend was assaulted, I might do the same?” I cringingly thought.

I look back now on behaviour that I wilfully laughed off and feel embarrassed, even somehow conned.

How wrong I was.

Are we the baddies?

Many allegations and rumours have circled about his antics out of the cage, of which I cannot comment here. I can only address some of what we can see with our own eyes.

The moment when he finally lost the majority, in my opinion, is traced back to one particular instance. The point after which there were no more “Ah, but he’s doing it to sell tickets, and sure, he has us all talking, so job done!” responses around the water coolers of the nation. Far fewer anyway.

It was when he punched Desmond Keogh in The Marble Arch pub, Drimnagh. An unprovoked assault by a multi-millionaire, martial arts expert against a 50-year-old man who was looking the other way. A man who merely had the audacity to turn down a shot of whiskey.

There it was, undeniable. We were wrong about him and there was no talking ourselves around it.

He is a bully. Irish people don’t like bullies.

That was the moment when the sheen wore off all of his other antics. When many of us truly accepted, we had been cheering for the bad guy. Not a “heel,” as they call those who take on the character of the villain in professional wrestling. A bad guy.

I looked back on past moments, moments that I now see for what they were. Like calling Khabib Nurmagomedov, a devout Muslim, a “mad backwards c**t” for, again, refusing a shot of whiskey (Conor doesn’t like being refused, does he?). Among many, many other incidents.

They weren’t the harmless antics of a clever self-promoter pushing buttons he knew the media would pick up on, not anymore. They were the appalling acts of an unhinged bully, who seemingly answers to nobody, regardless of his actions.

McGregor regularly and infamously, “tweets and deletes.” That is, he sends out flurries of unhinged and often nasty tweets, and then deletes them from his timeline, after his… interest has waned.

On 22nd Nov 2021, he tweeted and deleted that “the vaccines have not worked to stop this whatsoever,” ignoring how favourably Ireland is faring when compared to countries with lower rates of vaccine uptake.

According to the European Centre for Disease Protection and Control, at the time of his tweet, Ireland had an ICU occupancy rate of 1.9 per 100,000 of the population compared to the European Union average of 2.6.

He shortly followed up with a now deleted knock at immunologist Luke O’Neill.

While O’Neill did not reply directly, he did release a well-timed tweet of his own, containing a graph that also countered McGregor’s keen scientific observation.

McGregor took to social media in the early days of the pandemic calling on the Irish government to bring in a heavy lockdown to fight Covid-19. He has since acknowledged his opinion on the matter has changed.

As this article aims to show, we all change our minds sometimes.

Anyone is entitled to an opinion and to freedom of expression, but to put it bluntly, I think it best people aim to get their science from scientists, not from people who get punched in the head (with ever-increasing regularity) for a living.

McGregor’s entire marketing strategy has long been based around his “Irishness.” This phoney idea of nationalism has been at the core of the UFC’s model. “Ireland vs Brazil,” “England vs USA,” is how you are made to feel while watching their promotional build ups and fight events.

So, it was the UFC’s dream come true to have a brash Irish fighter on their books who could tap into the Irish-American market, with its lucrative and long-held love for prize-fighting.

Unlike most athletes who proudly carry the tricolour when representing their sport on the world stage, McGregor was not representing any sporting body. Of course, there was no particular Irish MMA body from whom he could receive backing. Again, there is no denying he was a trailblazer in his early career. There is however also no governing body to whom he must answer. Nobody to sanction him when he disrespects the tricolour, our beloved symbol of peace and progress, that he markets himself around.

It is my belief that anyone who claims to represent our country on the international stage should do so to the best of their ability, at all times. Not simply when their accountant tells them it is time to sell pay-per-view fight buys and whiskey to Americans.

Next time, just leave it in the dressing room, Conor. It’s not a prop.

While again, he is entitled to his opinion, how anyone can think they hold respect for our tricolour while also praising the anti-democratic Vladimir Putin as “one of the greatest leaders of our time,” is beyond me.

Oh, he also thinks we should leave the EU now. Perhaps a political pattern is emerging? 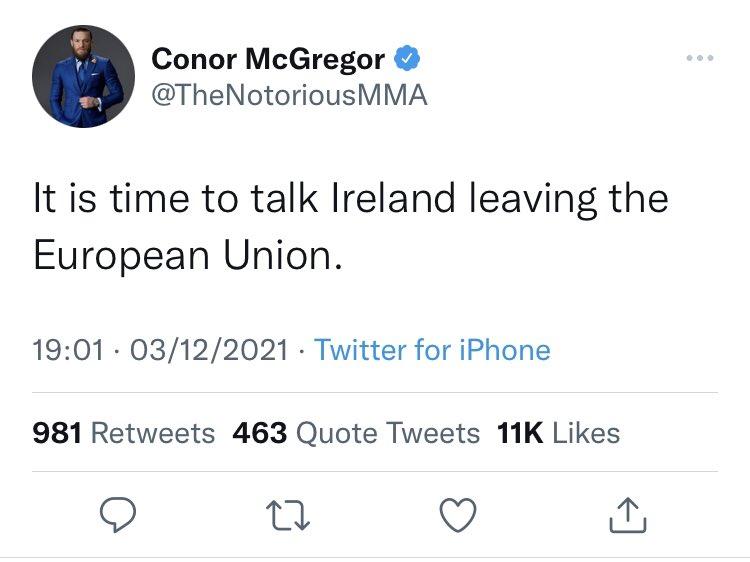 We are all human, we all make mistakes and deserve an opportunity to redeem ourselves from those mistakes. However, he has shown time after time that he has no genuine interest in truly representing his nation with pride. He seems to think himself above such things, almost like we are lucky he is representing us, not the other way around.

After another recent attempt to return to his old, dominating ways in and out of the octagon, after a string of big losses, McGregor revealed his own inner-workings yet again. After losing a trilogy bout to Dustin Poirier in July 2021, due to a doctor’s stoppage after he broke his leg, McGregor classily shouted death threats at his rival and his wife from the octagon canvas.

On 12 Sept 2021, he was recorded attempting to launch some sort of attack across a line of bouncers for reasons unknown at rapper Machine Gun Kelly on the red carpet of the MTV Video Music Awards. He is then seen throwing a drink at him and girlfriend Megan Fox.

Watching the footage, I thought to myself how telling it was that he just technically assaulted a woman, in the open. And nobody cared.

“Nothing happened with me. I only fight real fighters,” McGregor told an interviewer moments after the incident.

Surely, Desmond Keogh, for one, would disagree.

Down for the count:

I do not speak for everyone, needless to say. He clearly maintains a huge fan base globally.

I haven’t even scratched the surface here, but needless to say, I’m out.