The Union of Students (USI) organised a student protest in Dublin outside Dáil Éireann on 23 November demanding the Government puts an end to the country having the highest contribution charges for first time undergraduates in the EU. Student Unions (SU) in Galway and Cork have also organised protests in their own cities.

SU’s from TUD, DCU and TCD are among some of the universities in Dublin who attended the protest demanding the Government to invest in education. Students holding signs containing the phrase “#F*ckTheFees” as well as speakers blasting music were outside Leinster House on Molesworth Street.

For Irish residents and those in the EU, college in Ireland are considered free but there is a contribution charge for up to €3000 for each person who wish to attend college. Due to these ‘fees’, students in Ireland are currently paying the highest college fees in the EU. The F*ck the Fees campaign aims to highlight the frustration felt by third-level students towards the Student Contribution Charge. Supports such as the SUSI grant is simply not sufficient enough to maintain a good living condition for these students.

“The rising cost of living, I still struggle to pay for my transport and college materials with very little help from the Government,” admits Emily Carruthers, a student from NCI who attended the protest after being “let down by SUSI twice and had to fight for my placed to attend third level,” education.

According to USI, recent research showed that the cost of getting through a four-year degree is at an average rate of €50,000 for students and their families.

“Students have been angry for some time about the huge cost of getting a higher education in Ireland,” Clare Austick, USI President stated.

“USI, SUs and students across the island feel that students were scapegoated and their sacrifices diminished, throughout the pandemic.”

The main demands of the campaign include the abolition of the €3,000 student contribution charge, the reformation of the SUSI grant scheme to ensure that students are fairly assessed as well as funding to develop more affordable purpose-built student accommodation.

Earlier in the year, there was an online protest via Zoom campaigning for the same cause which was attended by hundreds of students. It is evident that students are fed up with the high fees, rising cost of living and the underinvestment in higher education.

“We’re angry about the cost of student housing, which continues to put higher education beyond the means of many in the country.  Meanwhile, property developers repurpose designated student rooms as fancy apartments for the wealthy,” USI said.

“Yet again in Budget 2022, Government showed that it has no interest in reducing the €3,000 per year Student Contribution Charge, which is the highest fee for an undergraduate degree in the EU,” Beth O’Reilly, USI Vice President for Campaigns said. 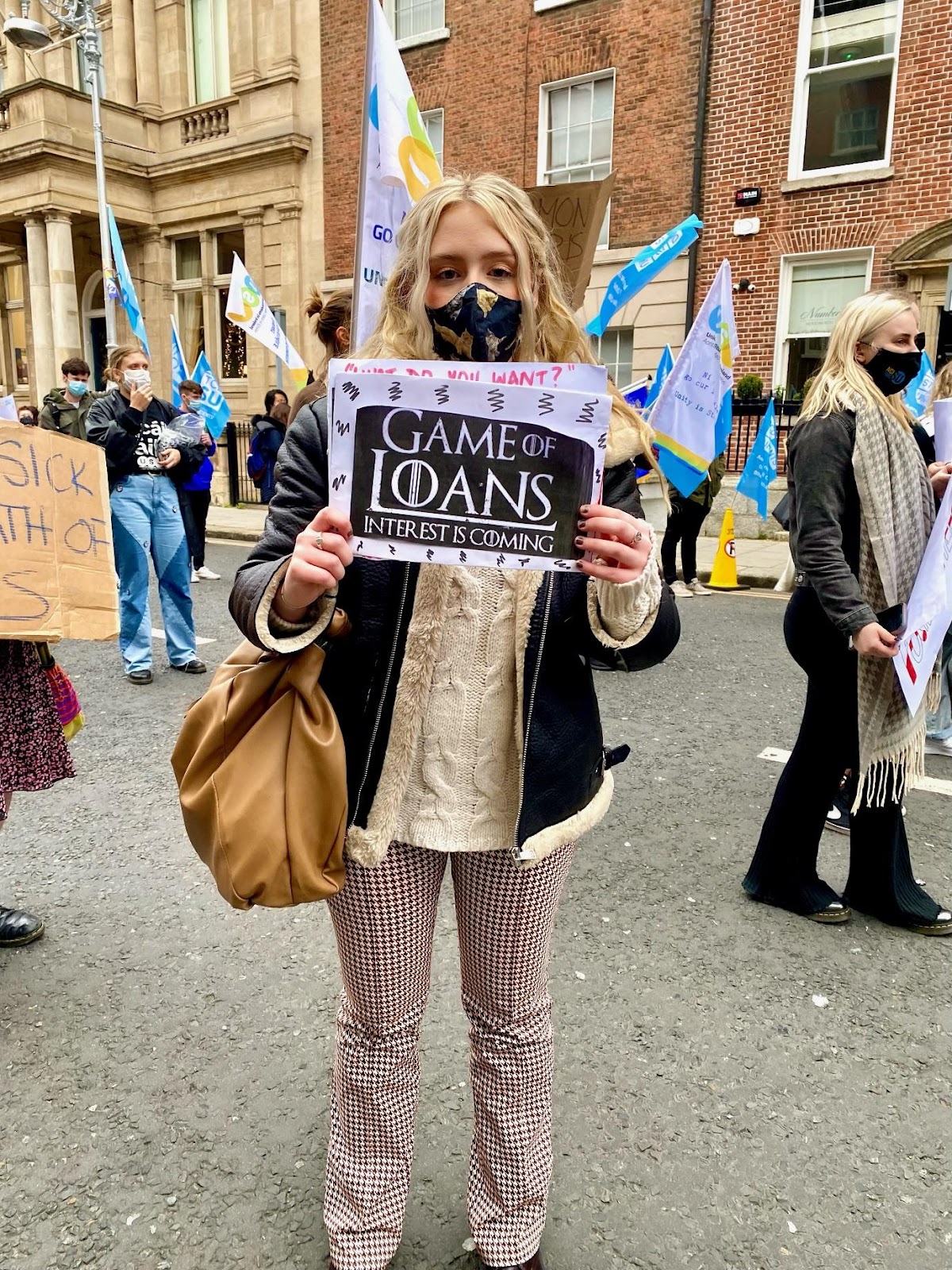 @emilyjcarruthers from National College of Ireland showing her support at the protest.

“These three regional protests are a chance for students to get out and show the level of anger and frustration they are feeling.”

As well as the soaring price of accommodation in Ireland, the recent Budget 2022 displayed no intention of introducing legislation or taking any necessary action to make housing more affordable.

“Students cannot get accommodation, and many have started this semester making long commutes, sleeping on couches, and staying in hostels or hotels not knowing if they will be able to continue with their courses,” Austick added.

“Even after the miracle of getting through a very expensive four-year degree, we’re not even able to buy a home for ourselves because of the outrageous housing prices… no wonder so many of us leave,” said Jodie Chalkley, a second year law student in Maynooth University.

New additions to the upcoming budget, however, have been praised by USI with funds for student mental health services being introduced.

“The €5 million funding for student mental health and wellbeing services is vital to start to address the mental health difficulties faced by students that were already an issue before COVID and have only worsened as a result of the pandemic.”